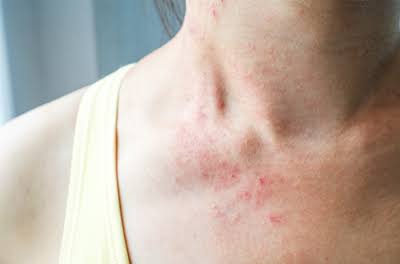 This is a common skin disease in children. It which often appears as a red, itchy rash normally on the cheeks, arms and legs. Atopic dermatitis typically begins in childhood, usually in the first six months of a baby’s life. Even though it’s a common form of eczema, it’s also severe and long-lasting. When you or your child have atopic dermatitis, it may improve at times, but at others it may get worse. Often, atopic dermatitis disappears as a child grows older, though some children will have atopic dermatitis flares into adulthood.
No matter where it appears, AD is often very itchy. Infants may rub their skin against bedding or carpeting to relieve the itch. In children of all ages, the itch can be so intense that a child cannot sleep. Scratching can lead to a skin infection.
AD can exist with two other conditions - asthma and allergic rhinitis. People who have asthma and/or who have family members who do, are more likely to develop AD
Because atopic dermatitis can be long lasting, it is important to learn how to take care of the skin. Treatment and good skin care can alleviate much of the discomfort.